Looking for the best restaurants in Bourg St Maurice? We have you covered.

A very brief history on traditional Savoie foods and cuisine

The Savoie region is one of the main parts of the French Alps, and it’s most likely where you will end up visiting if you come to France for a ski holiday. It is a very unique region because of its varied terrain with plenty of high-altitude mountains, mountain passes, glaciers and lakes, right down to lower-lying farmland and grassy areas.

Much of the region is covered in snow for a good chunk of the year, so the locals got creative with what they have. Traditional Savoie foods consist of hardy vegetables such as potato and onion with cheeses and cured meats.

One of the best-loved dishes of the Alps, tartiflette is a mouth-watering gratinated potato dish from the mountainous region of Savoie in France. It is made with medium-sized potatoes, white wine, Reblochon cheese, onions, smoked salt pork (lardons fumés), and often crème fraîche.
The dish is baked in the oven until the cheese browns and melts. The modern tartiflette was invented in the 1980s as a reimagining of an old gratinated potato, cheese, and onion dish called péla. It was created by the union of Reblochon cheesemakers in order to increase the cheese’s popularity.

Fondue Savoyarde is one of the most popular dishes from the French region of Savoie, located in the heart of the French Alps. Originally a dish from Switzerland, fondue quickly rose to popularity in the Savoie region. The dish is made with a combination of melted cheeses, usually Gruyére, Beaufort, Emmental, and Comté.
Savoie tradition says that if your piece of bread slides off the fork into the rich, hearty fondue, you must buy the next round of drinks, kiss the person next to you, or even run naked through the snow.

Most restaurants that offer Fondue Savoyarde on the menu will do so only with 2 people sharing, so keep that in mind if your travel partner is lactose intolerant.

If you are looking for restaurants in the French Alps with stunning Alpine Views, you will want to book one of these restaurants on your next holiday!

Gratin de Crozets is a traditional French dish originating from the Savoie region. It’s made with a combination of onions, lardons, crème fraîche, chicken stock, grated cheese such as Gruyere, Comte, or Beaufort, and Crozets – a traditional local pasta variety that’s small, flat, and square-shaped, made from buckwheat, wheat (or both), eggs, salt, and water.
The pasta is cooked in chicken stock, while the onions are fried with lardons in a pan. Both are then mixed with the addition of crème fraîche, topped with grated cheese, and baked in the oven until golden brown and the cheese becomes fully melted.

You will find this on the menus of most French Restaurants and cafes all over the Savoie region, and check the specials board as it is often listed on the menu of the day.

It’s produced exclusively from unpasteurized cow’s milk in the French Alps, and if you are in Savoie during summer you will very easily see the cows used to milk for this cheese. They live in protected paddocks dotted all over the region. It is likely that you will hear them before you see them, as they wear big bells around their necks.

Don’t leave Bourg-St-Maurice without stopping by the local co-op in town to buy some Beaufort cheese to take home. If they have it in stock, ask for the Beaufort Chalet D’Alpage. A Cheese that is made from a single heard of cow and aged over the summer months in a chalet. Delicious!

If you have a sweet tooth, you will love these!

Try all the region’s sweetest treats, at snack time or for dessert. Enjoy your hot chocolate with a delicious piece of Savoie sponge cake, also known as “biscuit de Savoie.” Lightweight and exquisite, this cake has become a traditional part of French cuisine. You can also try some delicious puff pastry doughnuts made with apple or pear, known in Savoie as “rissoles” or “bugnes.” Finally, blueberry pie is a must-try Savoyard dessert!

Hi, I’m Rachel, A chef by trade but a traveller at heart 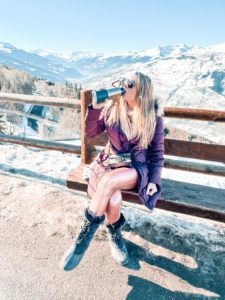 After recently spending a lot of time in the gorgeous French Alps, I realised there wasn't enough information out there for English speakers. And wa-la! Everything French Alps was born! Please reach out if you don't find the answers you are looking for, I'll be happy to help. If you want to butter me up to write nice things about your business in the French Alps, I can be persuaded with Tartiflette, Rosé wine and a basket of cheese. What can I say, I'm a cheap date, Just ask my BF :P